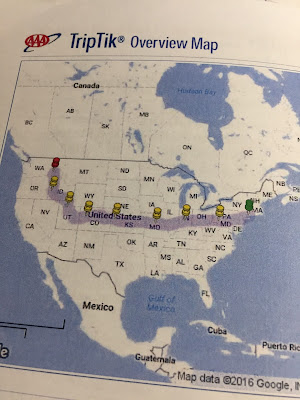 The following is a slight departure from art posting, which I hope to resume by the end of December!

The adventure has begun!  Having moved about 90% of the things I will ultimately be taking to Idaho already, I am now in the car with my two trusty companions, Rascal (dog) and Gertrude (cat).  And the car is packed to its limits - what can I say?  I have a lot of stuff, lol!

The map shows each of my seven overnight stays.... I have limited myself to about 6 hour driving stints, although of course the car time is a bit longer due to pit stops for all of us and filling the car.  Prior to leaving, I made reservations at each destination with pet-friendly motels directly off the Interstate to minimize lost time.  The pets are extremely well-behaved (even Gertrude, which surprised me! No howls at all - I hope I did not just jinx that!)  But even so, eight days in a car with all of us - well, you get it!  The total trip is about 3100 miles (or just shy of 4900 kilometers).  We hit 1200 miles today.


Here is the itinerary - I am writing this while in Columbia, Missouri.  Tomorrow is a very long day (7 hours driving, plus pit stops), but after that it gets to less than six hours daily, weather permitting. 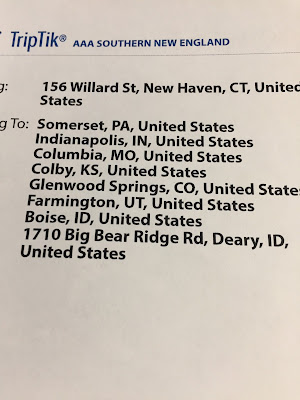 And the weather is a big deal this time of year here, especially with all of these storms blowing in from the Pacific Northwest.  Much of the country really needs the water, so I don't mind.  Just hope to avoid icy conditions. 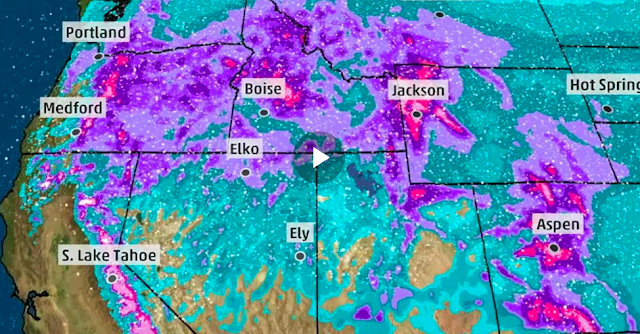 We did run into snow today, though luckily the storm was traveling east while we were moving west.... 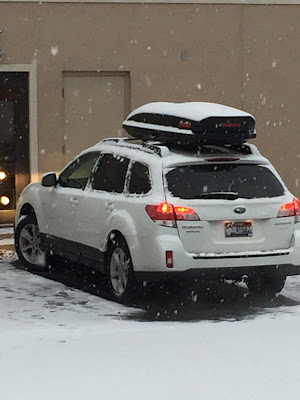 Due to a very bad accident involving two semi-tractor trailers, we came to a complete stop for two hours about 20 minutes after leaving Plainfield this morning.  Luckily we were warm and cosy, with a full tank of fuel, and good cell coverage so I could message my family and catch up on email, play a few games of solitaire, enjoy the really lovely snowfall (no kidding), and try to quell my anxiety about the delay.  We cleared out of the storm about an hour after finally getting back to actual travel.... 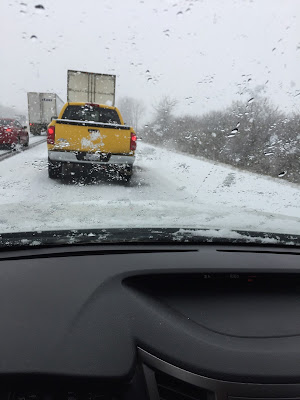 Here is what the setup for the pets looks like:

Gertrude (cat) is 14, but still very lively, and only 7 pounds.... so she has a little mesh "house" on the passenger front seat, equipped with a special pet heating pad (never gets very warm) plugged into the light via an octopus lighter thing I got in Minnesota while driving back last summer.  My phone, the makeshift satellite radio, and her heating pad are all plugged into this device.  I have had her "house" with heating pad set up on my couch for a few months, so she is very used to it. 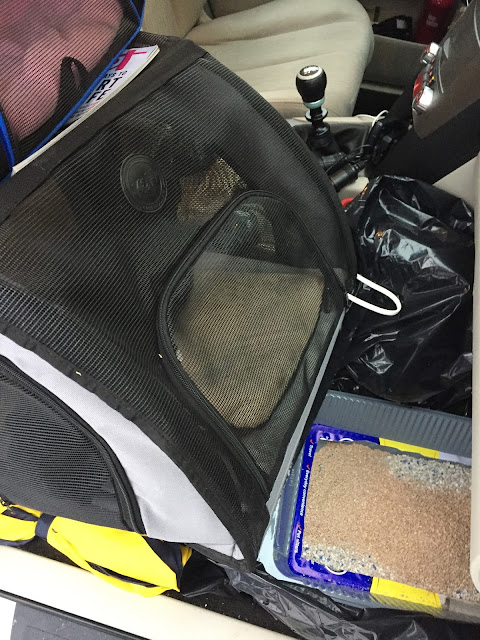 Her litter box is in the foot well, within a large garbage bag to contain the invariable litter spray. 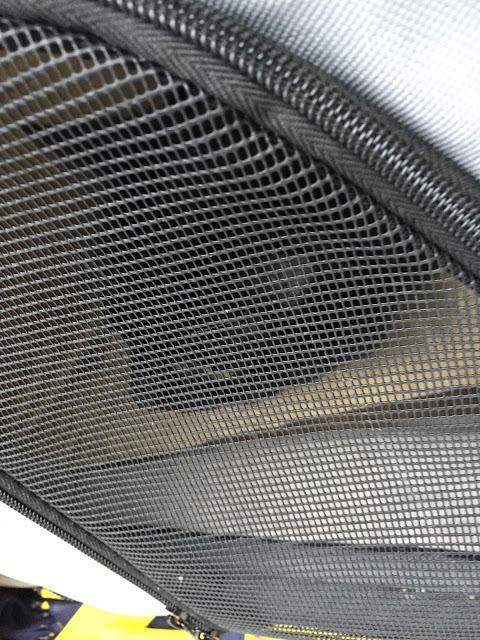 You can just make her out through the mesh.... she does very well, although it is hard on her eating habits as she usually grazes throughout the day.  So I feed her first thing once we are ensconced in the motel, and leave the food out until we leave in the morning.

Rascal has the back seat, which is his usual domain, though a lot more crowded than generally is the case!  By the way, that is a piece of dried chicken jerky that he has yet to discover in the lower left :-) 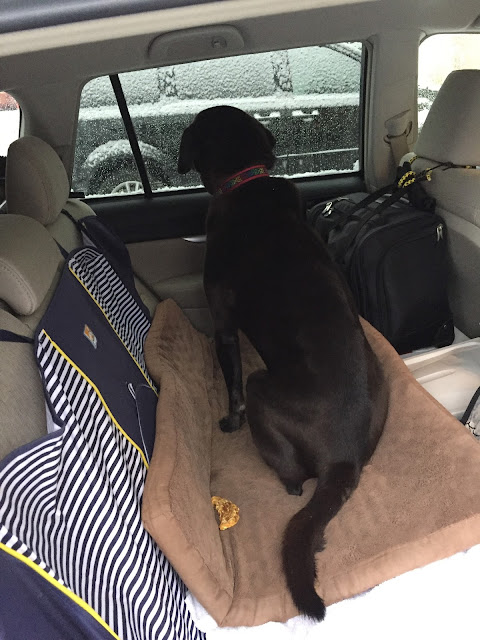 The backity-back is full with a real dog bed for Rascal once we are in Idaho, clothes for the trip, some craft stuff that happened to fit (of course!), my wonderful Bernina sewing machine, food for them and me (I have a lot of "add hot water and enjoy" stuff just in case I am too tired or the weather is too crappy to go out for real food.  The top carrier on the car is various small Ikea things for the house, and backpacks, or other outdoor things I wanted to take that are lightweight.

So off we go tomorrow - day four of eight, but who is counting!  Looking forward to getting home, and will post more pictures over the coming weeks.... and I hope to catch up with all the wonderful blog posts from all of you, after I finish grading my online courses tomorrow!  Such fabulous makes I spy out there!!  Can't wait to see them in more detail!

I've been away for too long!  And need to visit your blogs - soon!!  For now, here is my latest. 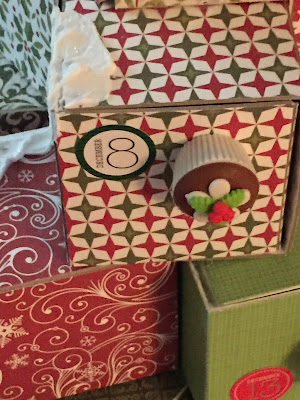 I have always loved advent calendars, as my mom made sure we had one every Christmas when I was growing up.  There is just something about that little surprise when you open the window each day that delights me.

A few years back I saw and bought on a post-holiday sale a cute wooden stacked-book advent calendar.  Each little box was numbered, and had a small door that opened to find a piece of candy.  My neighbors had just adopted an infant boy, and I thought how fun it would be to make him something similar, but with toys.  And good thing I thought about it when he was so young, as it took me three years to actually get around to making it!

To the right is a picture of my original inspiration: 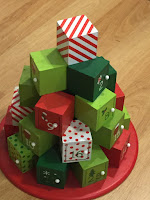 It stands about 10 inches tall.... and the boxes are all sequentially numbered (no fun IMO, as I love hunting for the right date on an advent calendar!)

Here is a picture of my version, which stands about 17 inches tall, not including the little star I put on the top after this picture was taken.  As it has rained very heavily the past few days, and I wanted to make sure my little friend got his calendar before December 1, I took it over yesterday afternoon when the rain lessened a bit, and finished at their house last evening.  The finish involved the star, and also making little washi tape tabs for the doors....  I will explain later.  This photo shows the calendar on top of the china cabinet, to keep someone's little fingers from temptation (he is three years old). 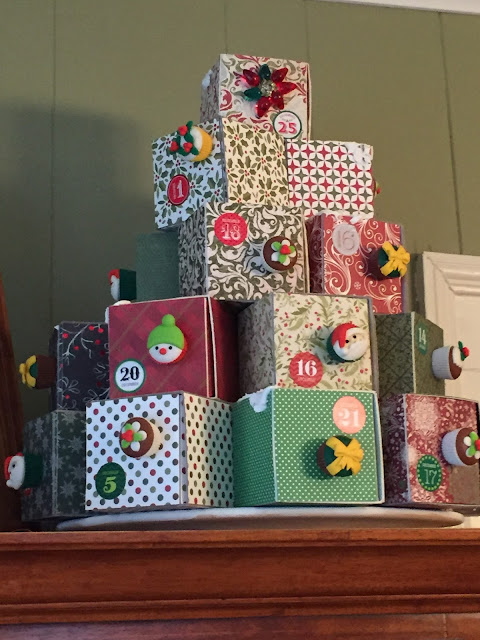 To make each box, I used Eileen Hull's square box die (Sizzix Bigz XL #658058) and adhered a variety of holiday scrapbook papers to my substrate on one side before cutting.  I used Stick-It and when I ran out of that, some double-sided tape in 6 inch and 2 inch rolls . 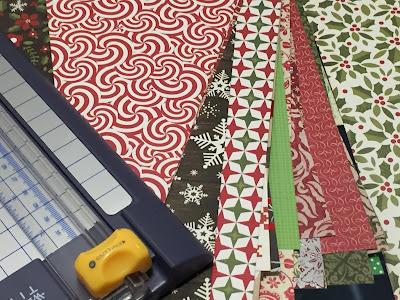 For the substrate, I initially used some 8 x 11 medium chipboard that came with white paint on one side, which I used for the inside.  However, after about 6 boxes, I switched to the much improved idea of Little Sizzles mat board in white, which is double sided and thinner - much better for the die, and easier all round! (The blades kept popping out on the die using the thicker chipboard, with the paper adhered with sticky stuff!)   I really hope Sizzix keeps making these mat boards as they work perfectly with Eileen's and other structural steel rule dies!

Eileen's die comes with a lovely little finish piece, as the box is supposed to close on the outside.  Here is a picture of her intention: 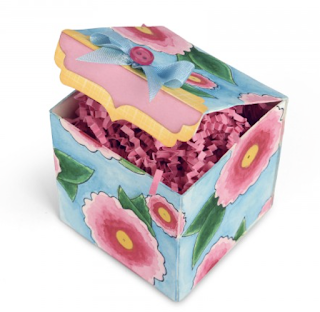 You can see those lovely brackets which go on the outside, and then she secures it with a ribbon.  I intended to do this with magnets, but realized I had packed them all up; they are 2700 miles away in my other craft room in Idaho at the moment in some moving box or other, lol!  After making a prototype, I realized I could probably get away with just tucking the lid into the box itself a bit, without the bracket pieces.  For the most part, this worked - but as an added "securing feature" I added little washi tape tabs, since my recipient will have his box moved daily from the top of the china cabinet to the table for his daily opening.  I was worried that all of this movement, and the toys inside (which are not secured down) would fling doors open willy-nilly and give away too much at once! 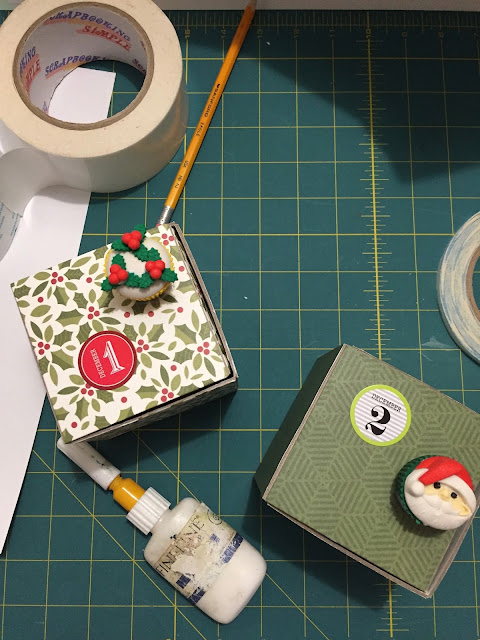 I also used double sided tape in 1/4 inch size to make the box - but if doing again in this size, I would take the time to hot glue.  I ended up reinforcing several areas with the hot glue due to the weight of the boxes themselves, the surprising humidity this time of year, and the toys - all of which were plastic, but which do contribute overall to the weight.  You can see the boxes warping slightly here, below.. 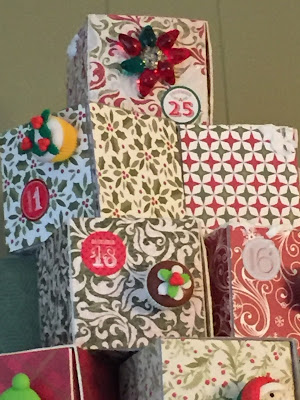 My bottom "rung" has 9 boxes, followed by 7, then 5, 3 and 1....  which were built on an unfinished  wooden disk/platter I purchased from a big box store.  I infilled the slight plate depression with corrugated cardboard, and then applied to all of it a good coat of gesso followed by craft white paint. 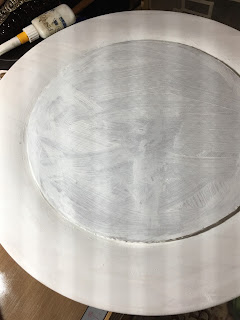 The little "handles are actually some type of cupcake eraser I discovered at a chain bookstore while waiting in line (they are the weirdest "erasers" I have seen ever, as each little piece comes out to function as such). 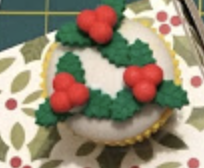 They seemed perfect otherwise for my purpose, but I deconstructed them and glued them back together with matt medium so the little nose, berry, hat or whatever would not come off when my little friend pulled on them. 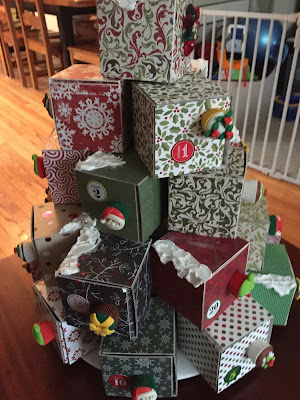 The numbers are commercial stickers.  I also added some texture paste with Tim Holtz's Clear Rock Candy glitter as a snow accent.... not sure I would do this again either, as I had to be very careful about not blocking a door opening, and I don't think it adds much to the overall effect without being more consistent.

So I definitely will try this again, but perhaps in a smaller size, such as the smallest of Eileen's Block die cuts.  I own this die but have not used it, so will have to figure out the door bit, as I believe these are truly blocks and not boxes! 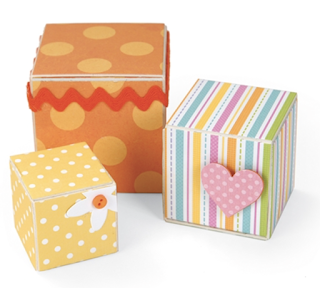 So Happy to Be Pin-Worthy! 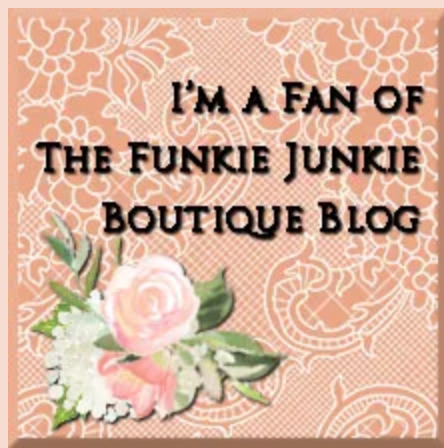 I love to play along here! 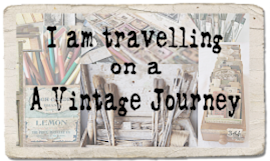 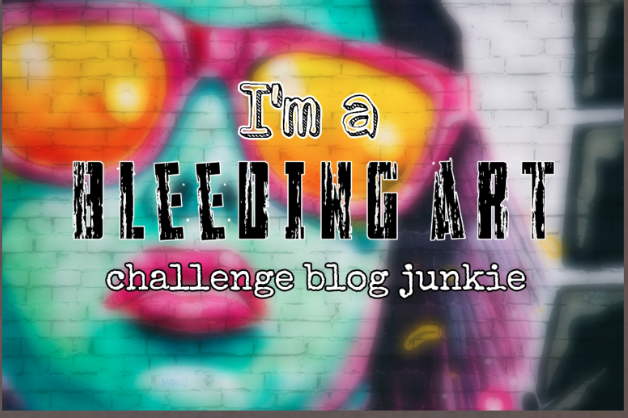 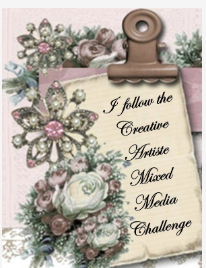 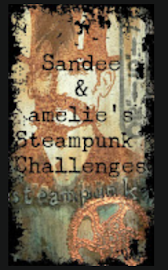 So happy to have won! 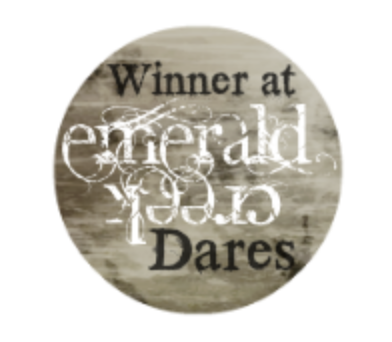 So thrilled to be a winner at

So honored to be a winner at ABC!

So pleased to be a Winner for my October 2015 Tag!

So happy to be a winner at Frilly and Funkie!